Autopsy of a failed side project

Recently I made the tough decision to shut down some side projects I poured more time into than I should have.

Below I detail what I learned from one of the failures...

Song lyrics without the spam

Of the three projects I closed, Lyricful was by far the biggest disappointment. Lyricful was a site that Nick Plante and I came up with in 2011. It was our attempt to provide a quality site with accurate song lyrics. 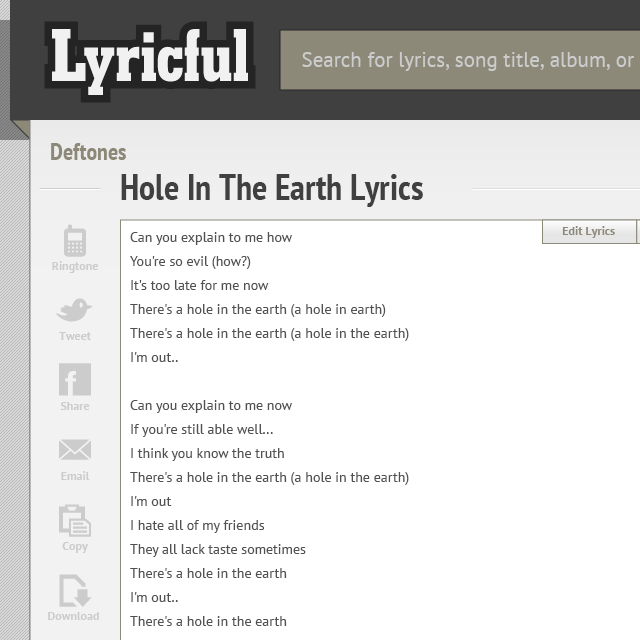 At the time, lyric sites were pretty bad.

If you searched for lyrics in 2011 you'd encounter a host of ugly sites, covered with spammy popups. Adding insult to injury, many of the lyrics they contained were flat out wrong.

We thought if we provided accurate content, a modern (understated) design, and social integration our offering would be a hit with music fans.

For the most part, we were right. Everyone we showed the site to was impressed, and remarked how refreshing it was compared to the competition.

As I'm sure you're aware - the only way in the lyrics space you can compete is to be on top of your SEO game and land top rankings on Google. Lyric sites are search driven - they're not destinations. We knew this from the outset, and followed all best-practice guidelines to optimize for search queries.

At our peak, we were averaging around 2,000 hits daily from long-tail keywords. Not bad, but definitely not enough to make the effort profitable.

We knew basic SEO tricks wouldn't be enough, and tried some things to kickstart growth of the site. For a new site we had limited success, but never reached the tipping point.

We shuttered the service mostly after failing to obtain funding interest due to the $6.6M judgement against LiveUniverse – but there were 3 other reasons I'll detail below.

A big issue we couldn't solve was "stickyness". We'd get people on the site - but very few were commenting, and even fewer were sharing our links on Facebook and Twitter.

People would land on our site, not see any comments and be on their merry way. If you know anything about SEO, you'll understand that having a high bounce rate and low average session time are negative factors that can affect your pagerank, and thus your search position.

Instinctively I attempted to "seed" the community to solve this issue, but didn't execute well enough.

I payed a small fee to friends so they'd comment on songs that were getting the most search hits. This had limited success, but we failed to double down on it. Here's a situation where I feel Amazon mechanical turk would have been successful.

Sites like Quora, Reddit, and AirBnB have 'seeded' their sites in different ways, with obvious success. We failed to emulate this successful pattern.

Looking back now, it's clear that we failed to innovate where one other site in particular excelled. RapGenius launched a couple years before we did, but was still small at the time.

If you're not familiar with their site - its claim to fame is a small UI tweak that allows visitors to annotate songs, line by line. While I didn't see the value in this innovation then, others certainly did. RapGenius secured nearly $17M in funding from 2011 to 2012.

They've since expanded from more than rap lyrics, and look like they're planning to annotate the entire web. As with most VC backed sites I'm unsure if they're profitable, but it looks like they could be on the path to success. Kudos to them.

3 - Failure to be realistic

Finally, the largest mistake we made was a failure to critically view the project and determine if it was a feasible business.

At the time I thought we did enough - contacting lawyers to look into possible DMCA issues, comparing our offering to existing lyric sites, etc. However, now I realize that we let the excitement of a new project cloud our better judgement.

We were under the impression that if we built it, things would work themselves out. This sort of enthusiasm had worked for me in the past, on Cashboard, but worked against me on Lyricful.

We eventually closed shop after deciding that possibly being held liable for our content was unacceptable.

Fortunately all wasn't lost on this project. I learned a new SEO trick or two and was able to pick up some technical skills I didn't have before.

In my view, the biggest lesson learned was knowing when to wave the white flag, and refocus my energy on winning efforts elsewhere. The allure of new projects is tempting, but doubling down on existing successes is proving more valuable.

Somehow ending this article with lyrics from a classic song seems appropriate.

You never count your money when you're sittin' at the table.

There'll be time enough for countin' when the dealin's done.