Learning what motivates your customers to make a purchase is essential for product designers, now more than ever.

It's been said that the most constructive feedback comes from people who've recently purchased something from you, and those who've just decided against it.

Products like UserVoice, Tender, and Intercom all make it easy for existing users to communicate with you, but what about the ones jumping ship? Those of us who design software services (SaaS) are in a unique position to collect exactly this sort of feedback.

During the first few years running Cashboard we provided an optional text area after cancellation. It allowed customers to provide their parting thoughts.

The small percentage of people who used this feedback mechanism provided us with great insight and a chance to interact with those who might have otherwise been lost in the shuffle.

The case for requiring feedback on churn

I started to wonder, what would happen if we required cancellation feedback, instead of making it optional?

I hypothesized that some people would get upset, but we’d gain more by doing it than the goodwill we’d lose.

At the beginning of 2013, we started requiring cancellation feedback instead of making it optional.

We crafted an open-ended question, worded it the best way we thought possible, then let it fly… It's gone through a couple revisions, but this is what we ended up with. 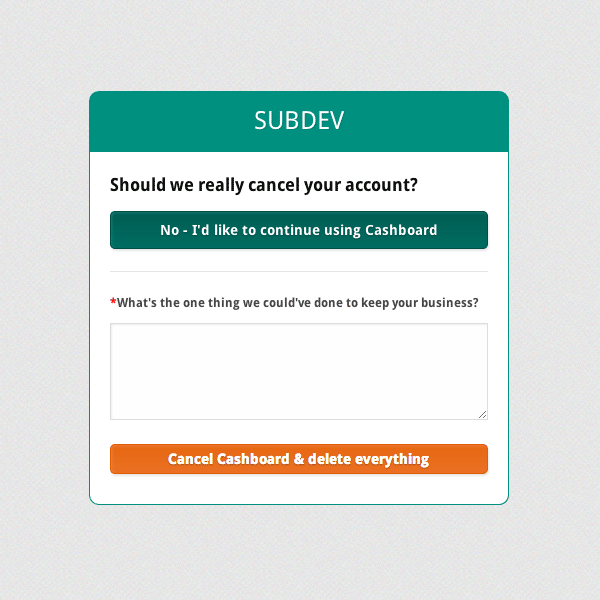 Over the course of a year I’ve found there are drawbacks, but overall I believe the good outweighs the bad.

Obviously, a portion of visitors who’ve signed up for a free trial will simply want the quickest way out. If you require any length of text you’ll get a bunch of garbage data, like these gems…

I disregard these and keep it moving. No need to waste time on 'em.

2 - Angry people will attempt to hurt your feelings

Requiring feedback from people who don't want to give it will piss them off — understand this going in. I justified it by theorizing we killed any goodwill earned with the defect that drove them away initially.

- This form, is a perfect metaphor for what's wrong with your service. Thanks, but, no.

- FUCK YOU THIS SUCKS. YOUR APP SUCKS TOO.

As expected some people did get highly upset, but there weren't enough to matter. I can't come up with any situation where we could have rescued the opportunities. They're collateral damage in the ongoing war to make Cashboard excellent.

Ignore the mean ones, laugh at the creative ones. No big deal.

3 - You'll get lots of vague responses

Regardless of how you design the feedback form you're guaranteed to get vague, unhelpful data.

- Because I don't use it anymore.

- Going with an alternative.

I respond to each and every one of these personally. About 1 in 5 will respond with useful data. Crafting a message in your most friendly, personable tone really helps.

1 - You can catch confused customers

People using free trials want things quick and easy, right at their fingertips. If they don't discover the features they're looking for initially they'll bail.

- Need the ability to have invoices automatically sent with preset items

- I could not customize the invoices.

- Would like to have client login ability to pay for their own invoices.

Cashboard offers all of these things, and I was able to rescue each of these accounts by instructing them how to accomplish their goals. This happens a lot, and allows us to turn potential failures into wins.

I have a running "hit list" of things that need improving and fixing. Cancellation feedback constantly reminds me of the items that matter the most.

Despite having a healthy userbase that accepts the status quo, it helps reinforce the fact that we could grow Cashboard even more by simplifying the features already in place — not introducing new ones.

Over 7 years running Cashboard I've found this to be the best possible method of working. We used to solicit new feature ideas, work on those, and move forward. It didn't move the needle.

Through this feedback I've found what moves the growth needle is concentrating on improvements to our existing feature set.

The overwhelming thing I realized with this feedback is that free is our biggest competition. I used to think the more well known services were our competition. I was wrong.

We used to offer a very capable free account … people still complained. What really helped was getting rid of that, and pricing our solo plan low enough to compete with people using Excel spreadsheets or Word documents to send their invoices.

This insight alone was worth requiring cancellation feedback.

DO NOT REPLY — The best way to tell customers you DGAF.

Sell service first, software second - Why your SaaS is backwards