Finding meaning on the path of mastery

I’ve always been able to pick up skills fairly quickly, and I’ve been blessed with the ability to follow whatever caught my attention. Blessed to have supportive parents in adolescence, and a steady income to support my dabbling in adulthood.

Because of this wide range of competency, many people in my life seem to think that I’m gifted. They comment on how it “must be nice to be good at everything”. This was a problem in my younger days. I had quite an ego, and at that time it got me in more trouble than I cared to admit.

What most of my friends don’t know is that I’m insanely envious of people who — in my mind — have mastered a skill in a field I find interesting. I often sit back and think how pleasant it must be to be able to select one skill and focus on it. What a luxury. What a gift. I’m even more envious of the people who can make that passion their career.

Feeling more than a little lost in life after losing of my father to cancer last year I became obsessed with the thought that I could be wasting my life not following my true path.

While at the hospital, his health in decline, my dad constantly kept mentioning the book on grammar he’d never written; as if he had. Kept asking me for feedback on the latest plot twist in his new book; as if I’d read it. He kept discussing the crime-based tv series he was developing. We had in-depth, hour long conversations about how the characters in his productions were going to escape their latest predicament. I played along like I knew what was going on, as anyone would’ve done in the same situation.

It was great being able to have those moments with him, but in the weeks after he passed I spent quite some time getting rid of his belongings and thinking about the discussions we had. There had to be some truth to all of those conversations. Maybe he’d been holding out. Maybe there was a stash of unpublished material tucked away somewhere.

I spent a good deal of time sifting through his belongings. His physical files, his computer files. Sadly there weren’t any novels. I found no hidden projects. The closest thing I stumbled across were business papers for startups I didn’t know he was involved in at a young age, failed attempts at securing investments for those projects, and work related to his career in advertising.

The empty search my rattled my foundations. He never did what he truly wanted to do; write and publish his stories. My dad chased his business ideas instead of his passion and still died poor.

As one would at a time like this, I started thinking about my own life.

Needless to say I felt lost. I needed more than life was currently offering me, but I wasn’t sure where to start.

I began to revisit books from my library, including favorites like What Should I Do With My Life?, and How Will You Measure Your Life?.

I stumbled upon Elle Luna's enlightening The Crossroads of Should and Must. I leaned towards existential selections on my reading list, where I finally picked up Victor Frankl’s excellent Man’s Search For Meaning. I was rudderless, searching for answers.

My thoughts kept coming back to all of the things I hadn’t done; my unrealized projects; my lack of achievement in one single field. During that time I came across this great TED Talk by Cass Phillipps on Passion. It really hit home.

In the talk, she mentions identifying as a “dabbler”; as defined in the book Mastery by George Leonard.

The Dabbler approaches each new sport, career opportunity, or relationship with enormous enthusiasm. He or she loves the rituals involved in getting started, the spiffy equipment, the lingo, the shine of newness.

When he makes his first spurt of progress in a new sport, for example, the Dabbler is overjoyed. He demonstrates his form to family, friends, and people he meets on the street. He can’t wait for the next lesson. The falloff from his first peak comes as a shock. The plateau that follows is unacceptable if not incomprehensible. His enthusiasm quickly wanes.

I couldn’t identify 100% as a Dabbler, but the idea of jumping between different interests did strike a chord with me. ‘What the hell’, I thought; guess I’ll read that book too. 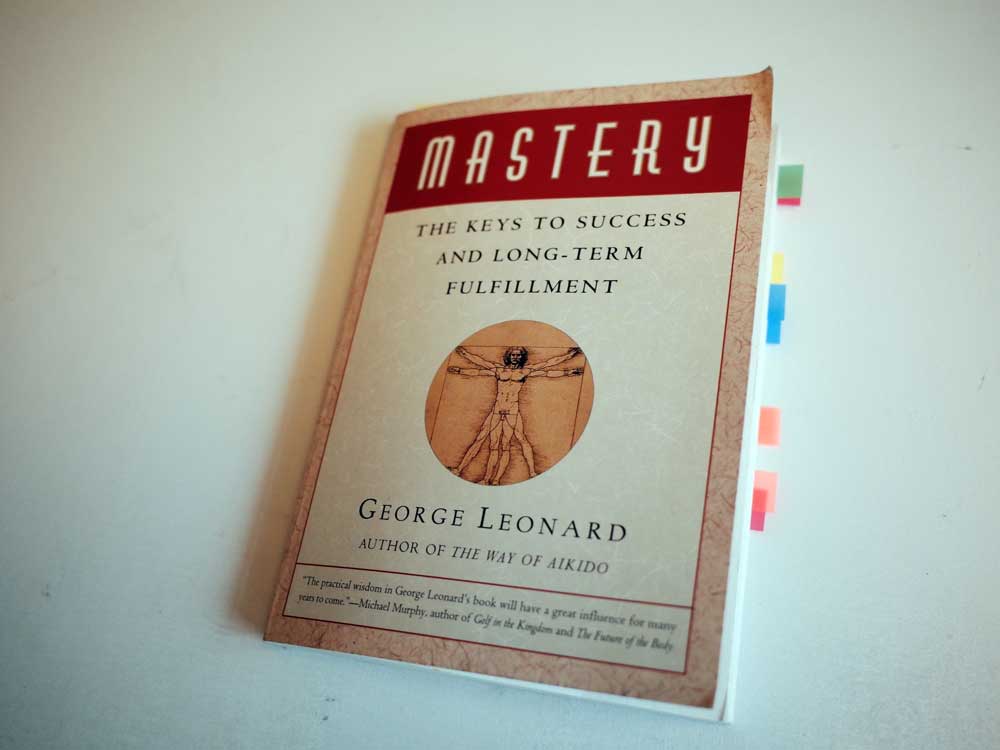 George Leonard’s Mastery is filled with to the point, practical, immediately useful advice. It’s plainly written, and quick to read; my favorite type of book. I finished it in a few hours.

Leonard was an Army pilot, Akido master, and of course - author, who approached mastery through that lens. He reasoned that mastery is not a destination, but an ongoing journey.

He sings the virtues of practice, and shuns the commonly held belief that “winning isn’t everything, it’s the only thing”.

I recognized that I wasn’t a dabbler, but more of what he calls an Obsessive.

The Obsessive is a bottom-line type of person, not one to settle for second best. He or she knows results are what count, and it doesn’t matter how you get them, just so you get them fast. In fact, he wants to get the [golf] stroke just right during the very first lesson.

He stays after class talking to the instructor. He asks what books and tapes he can buy to help make him progress faster.

His first spurt [of progress] is what he expected. But when he inevitably regresses and finds himself on a plateau, he simply won’t accept it. He redoubles his effort. He pushes himself mercilessly. He refuses to accept his boss’s and colleagues’ counsel of moderation. He works all night at the office.

Somehow, in whatever he is doing, the Obsessive manages for a while to keep making brief sports of upward progress, followed by sharp declines – a jagged ride toward a sure fall.

In life, and in business especially, I was focusing on the wrong things — the wrong goals. I was too concerned with results. Improving the bottom line. Growing revenue so I could hire a full-time staff.

Most of my efforts were centered on tweaking pricing plans, building sales funnels, improving the marketing site, and responding to customer feedback. These are things that bring me no joy, and coincidentally brought minimal results. I’d stopped creating and refining actual product. I realized that what truly mattered in that context; and what I fully enjoyed was the feeling of accomplishment in making a useful tool. Taking pride in my craft and refining those creations.

On top of that, I’ve been guilty of focusing exclusively on my business pursuits, to the exclusion of everything else. I was so focused on achieving “success” in business, getting that trophy, the gold medal, the #1 spot — that I lost my way on the path of mastery for other interests that brought me even more fulfillment.

Expanding on that idea, and through much reflection I’ve come to the conclusion that what I really enjoy overall is the process of creating. Losing myself in the flow of repetition and practice, and the thrill of improving at something I loved.

I wasn’t really envious of people who had mastered one thing — it was their achievement I focused on. Placing attention on achievements over the devotion those people had to a goalless journey was my red herring.

I realize that this isn’t normal faire for a design, software development, or business blog — but I’m publishing it in hopes that it hits home and potentially helps someone else who’s currently in the same position I was.

Since then, I’ve been writing a lot my journal. I’ll be publishing selected items that I feel might be useful in this same vein. Stick around.

Other choice quotes from the book

Consistency of practice is the mark of the master. Continuity of time and place can establish a rhythm that buoys you up, carries you along.

It’s fine to have ambitious goals, but the best way of reaching them is to cultivate modest expectations at every step along the way. When you’re climbing a mountain, in other words, be aware that the peak is ahead, but don’t keep looking up at it. Keep your eyes on the path. And when you reach the top of the mountain, as the Zen saying goes, keep on climbing.

Recognition is often unsatisfying and fame is like seawater for the thirsty. Love of your work, willingness to stay with it even in the absence of extrinsic reward, is good food and good drink.

Think about it: if winning is the only thing, then practice, discipline, conditioning, and character are nothing.