Headlines over the past week have been filled with rumors that Twitter is positioning itself for acquisition by a variety of suitors. Think of any big tech or media company. They’re likely to have been mentioned. Disney, Comcast, Google, Facebook, Apple… The gang’s all there and Salesforce too. Many people have speculated about what each of those companies could do with Twitter — but what all of them are missing is that Twitter doesn’t need to sell in order to survive.

Even though the little blue bird has consistently lost money since inception Twitter still has an estimated 3.5 BILLION dollars on hand from their IPO, which by USA Today’s estimation gives them 412 years to “fix the problems” they face at their current burn rate.

Opinions on what those problems are vary depending on who you speak with — but most agree that Twitter has to grow to finally turn a profit.

(For now, let’s assume this is really the problem and continue down that path…)

Twitter’s monthly active user count has stagnated around 300M for nearly a year, which is concerning Wall Street and affecting their stock price. Twitter’s solution to the growth problem seems to center around adding live streaming of sporting events, which I believe is misguided.

Recode had the following to say regarding live streaming

Twitter is simply the platform for everyone else’s content, and we have no idea how large or how valuable Twitter’s audience actually is. When Yahoo streamed an NFL game back in 2015, the viewership numbers were terrible by NFL standards. There isn’t much reason (yet) to believe Twitter’s streams will fare any better.

Does anyone else see this as promising?

Why is Twitter focusing on unimportant things that will needlessly clutter the core experience like streaming live events?

Instead of trying to morph into a new-school media company Twitter should cut the live streaming business and double down on core experiences that it already does best: News dissemination, discussion of current events, and connecting people through online messaging.

How is Twitter performing on experiences that actually matter?

If we look at the core values I outlined above, they’re doing great at the first — disseminating the news.

Despite people’s ability to highjack #hashtags and cause temporary insanity, Twitter has without a doubt become THE place to get news online first.

Journalists love the platform and break information there consistently. Tech, sports, politics, whatever — if it’s a story 99% of the time people on Twitter will have the scoop before anyone else.

Citizens turn to Twitter first during times of political unrest in America, and people abroad have been known to do the same thing.

Hell, the governments of Egypt, Libya, and Syria had to resort to cutting off the internet completely in an attempt to control unrest during the Arab Spring movement mostly due to Twitter’s influence and ability to connect people.

Since news breaks first on Twitter, a vast majority of us also show up there to react to it, and discuss with others. Twitter does a great job of staying on top it all with trending topics and their newly launched “moments” feature, but bad things start happening when you have a prolonged conversation about one subject.

Ever been involved in lengthy a Twitter conversation with multiple people? It quickly becomes a huge mess as more people engage. 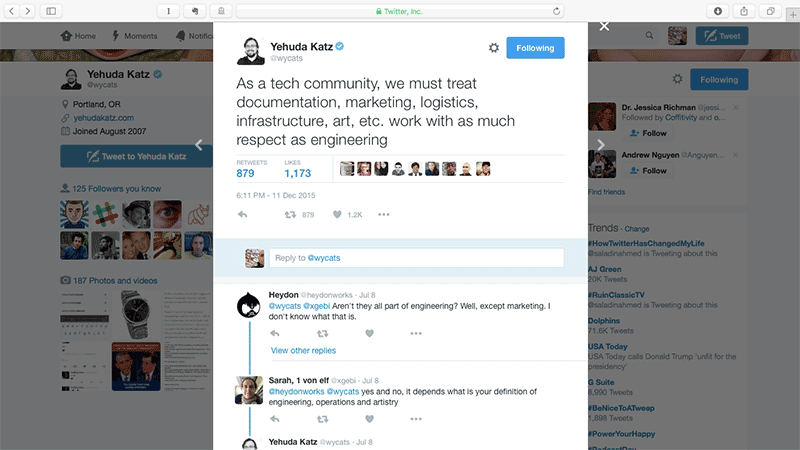 Tweets become a jumbled pile of usernames and only a bit of text here and there. You find yourself pasting the same answer to multiple people, and threads of conversation get lost in Twitter’s flat timeline. It’s impossible to figure out who said what without a ton of clicking back and forth between message threads on multiple accounts. The experience is ugly.

Despite the difficulties people continue to interact like this daily on Twitter. For me, it’s by far the most infuriating experience on the service.

So how do they solve it? It’s not black magic… Twitter needs to cut the bullshit and develop a first-class “discussion” feature.

To me, this is a no-brainer.

Most people I’m interested in engaging with are active on a variety of message services, but I tend to turn to Twitter first when contacting them. Despite my inclination, a lot of people still “don’t get it”.

All one has to do is read the comments on a public Twitter article to get inside the heads of the people who fall into that camp. These people either tend to be older or see it as a narcissistic, broadcast only medium.

I hear you there. No interest in such a silly form of communication. Nor do I like acronyms, hashtags and the use of the word 'viral' outside of it's use in medical context. I am an X-er but was luckily raised with Boomers. I find it pathetic a company that facilitates your ability to write a couple sentances online for others to see would have $3.5B laying around. God save the Republic.

Twitter - where everyone talks and nobody listens. They should distribute that cash to shareholders and call it quits.

People tweet to be heard....anyone who follows people have issues. And anyone who would invest in this nonsense really has issues....so tweet away America.

My opinion on solving this? First, fix the discussion problem as I outlined above, then re-focus on messaging. Messaging is a huge space they’re missing out on. Twitter fails to promote it as a first class feature.

Emphasize messaging by doing the following…

Taking those steps would ensure everyone knows Twitter isn’t just a broadcast medium. It would energize their core user base, and spark interest for people who haven’t quite gotten it yet.

I hope they head in the direction I’ve laid out here, and stay around for a long time. Who knows if they’ll actually do that though. If they don’t, they’re ripe for disruption…

I’m a huge Twitter fan. I’ve used it to stay informed, keep up to date on things that I care about and connect with friends for years. If you’d like to connect with me on there, I’m @subimage…